This is another workshop I did with Etelage,  it's called Earring Duo & Stylists Secrets and is it is the simplest set to make. 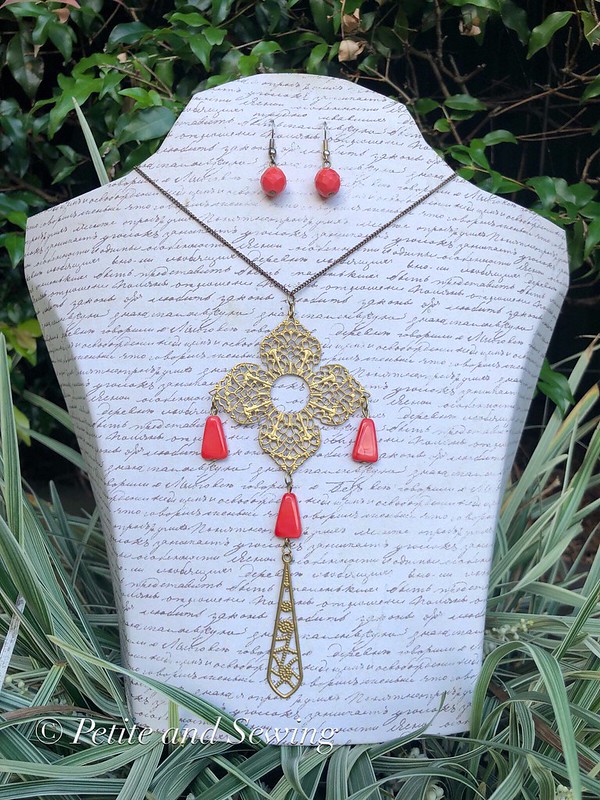 I just love the colours and the delicate nature of this necklace.

The main piece is a large diamond filigree brass stamping and then you can add the colour beads of your choice to the points of the diamond. 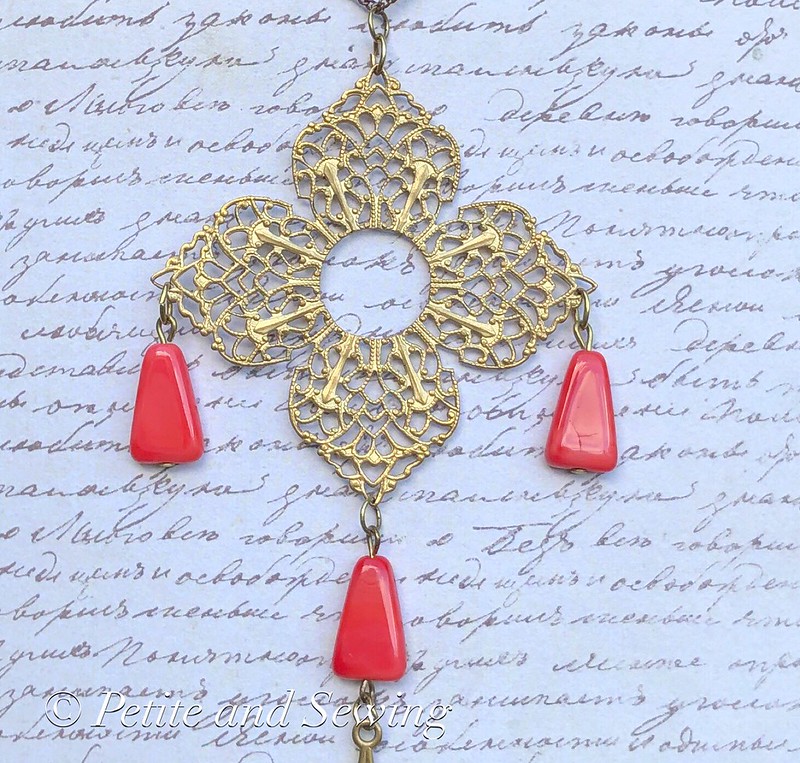 I then chose a round bead to mimic the centre of the diamond to make a pair of earrings. 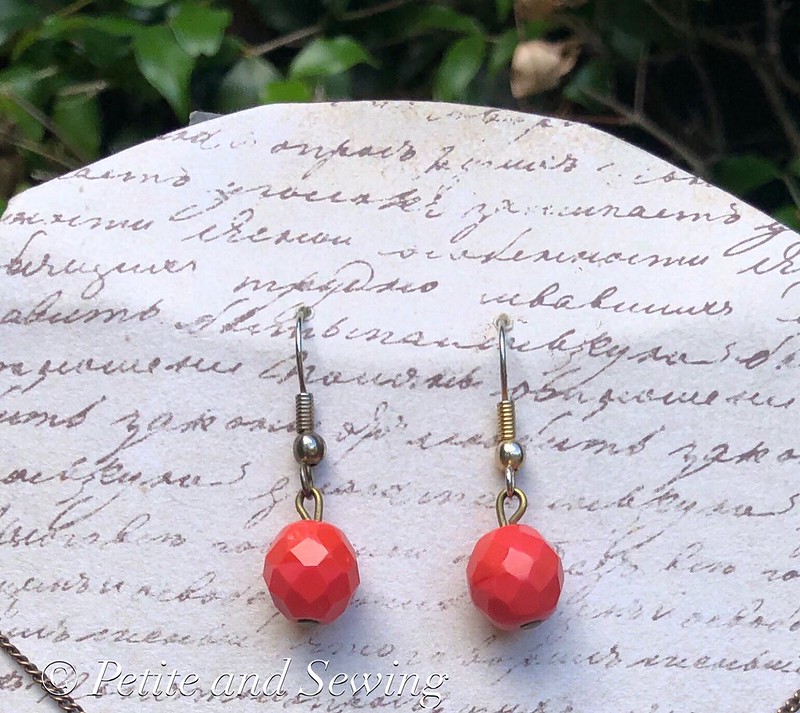 The set is getting a lot of wear with my T-Shirt with a Twist and also my Navy Linen T-Shirt during summer and I expect it will work well with my Cream Top for winter.

Still catching up with my sewing backlog, here is a gift I made for Mark back in September last year.

I have read a lot of reviews of the Thread Theory Como Trunks and purchaed a kit back in 2016 to check out the fabric quality as well as the elastic that they suggest you use. 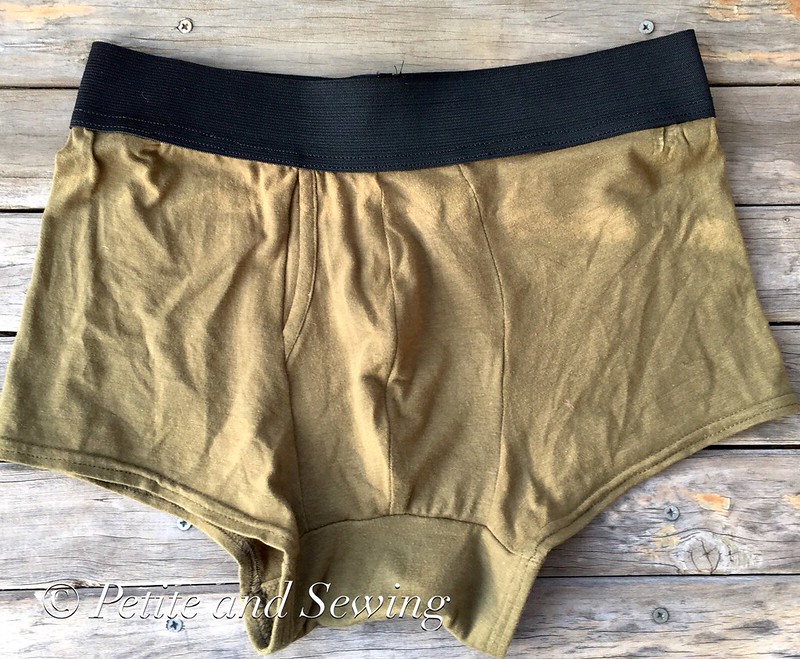 These were made for our 16th Wedding Anniversary in 2017, and the gemstone colour is Peridot which by my thinking is green therefore this olive fabric in the Como Trunks kit was perfect and thankfully quite quick to make up.

For some reason last year Mark decided to wear trunks and went on a bit of a purchasing spree.  At this time he did make the comment that he didn't want any for his Birthday or Christmas so I felt that I could still give him a pair for our Wedding Anniversary.

As usual the Thread Theory instructions are very clear and you end up with a very professional looking pair of trunks. 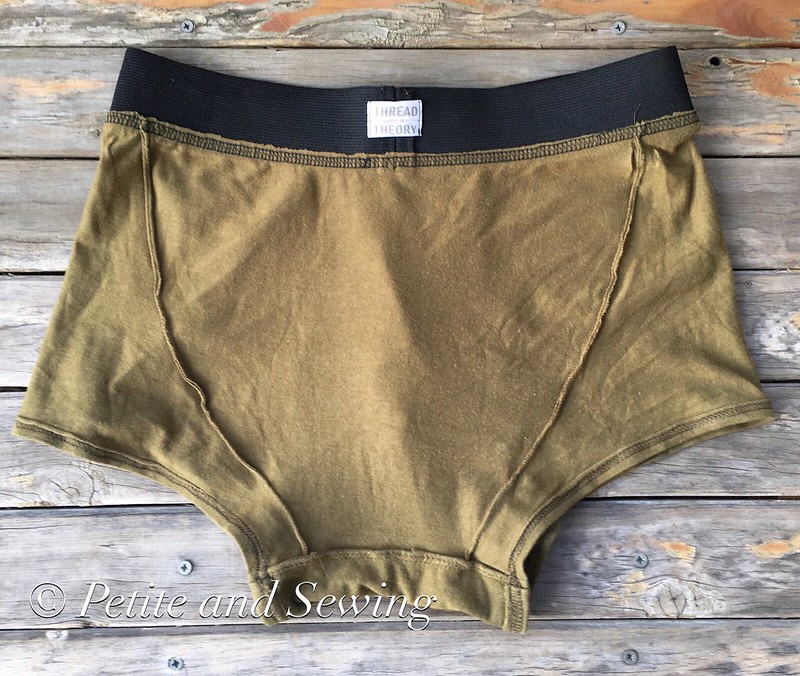 The only change I made was the way I sewed on the elastic for the waist, I followed how Mark's RTW trunks were sewn which meant I had to trim the excess fabric away using my Duckbill scissors.

The Coverstitch was perfect for stitching the elastic in place as well as for the two leg hems. 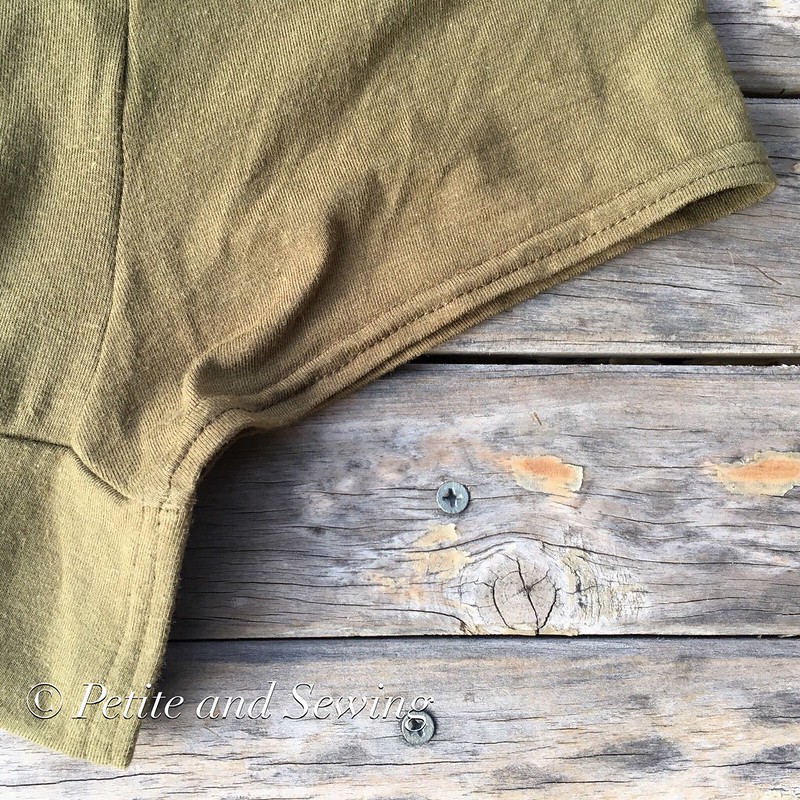 There are no modeled photos but they are in high rotation which is great, but so far there hasn't been a request for any more so I will see if that changes as the year progresses.

This is the 3rd top that I made during our weekend away along with the skewed cowl and cream top back in May. 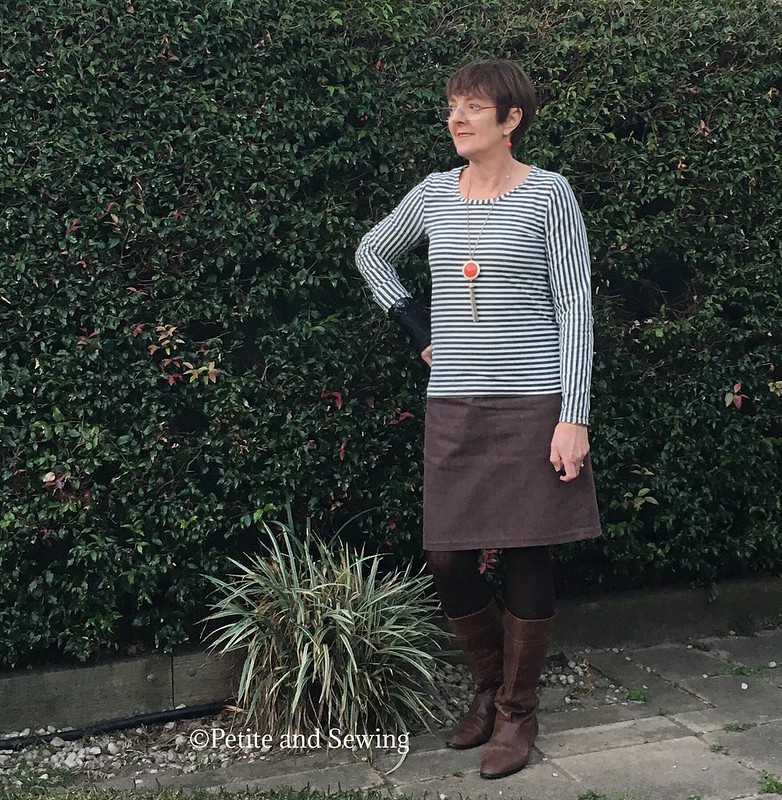 I originally purchased this fabric from The Remnant Warehouse for a shingle dress, Vogue 8904 and no matter how I tried I just couldn't get it to sit right at my swayback even taking notice of all the very helpful blog reviews.

So this fabric has been marinating in my stash since then, still in pieces, so after seeing so many striped tops this year I decided it was the year to finally do something with the fabric. 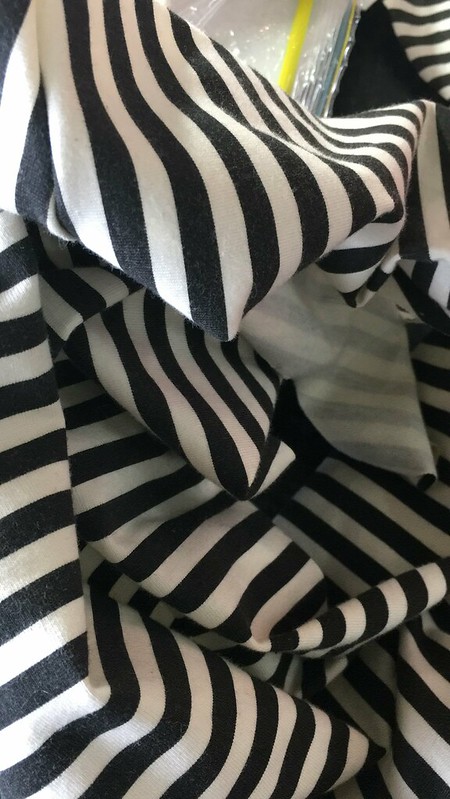 Michelle showed me a great trip for matching the stripes, using Steam-A-Seam you finger press this onto the right side of your fabric at the seam line and then slowly remove the tape and finger press your stripes together, 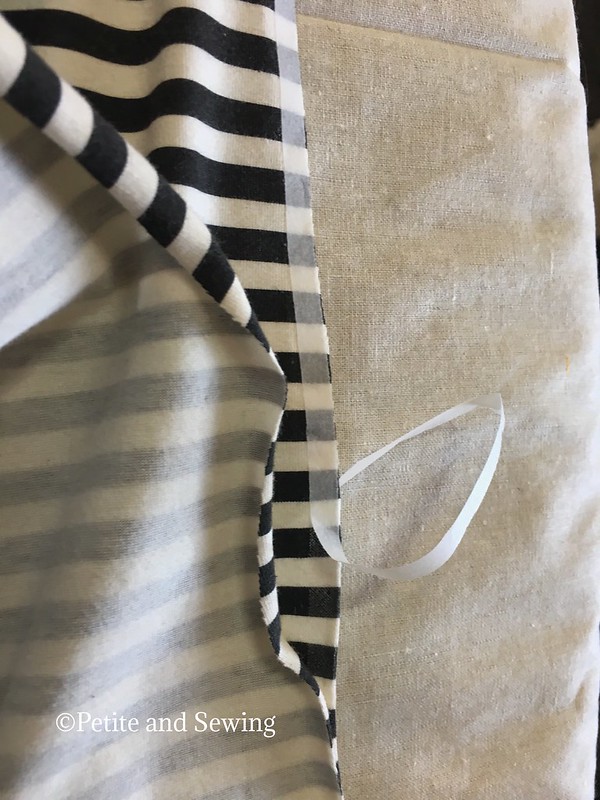 it worked a treat 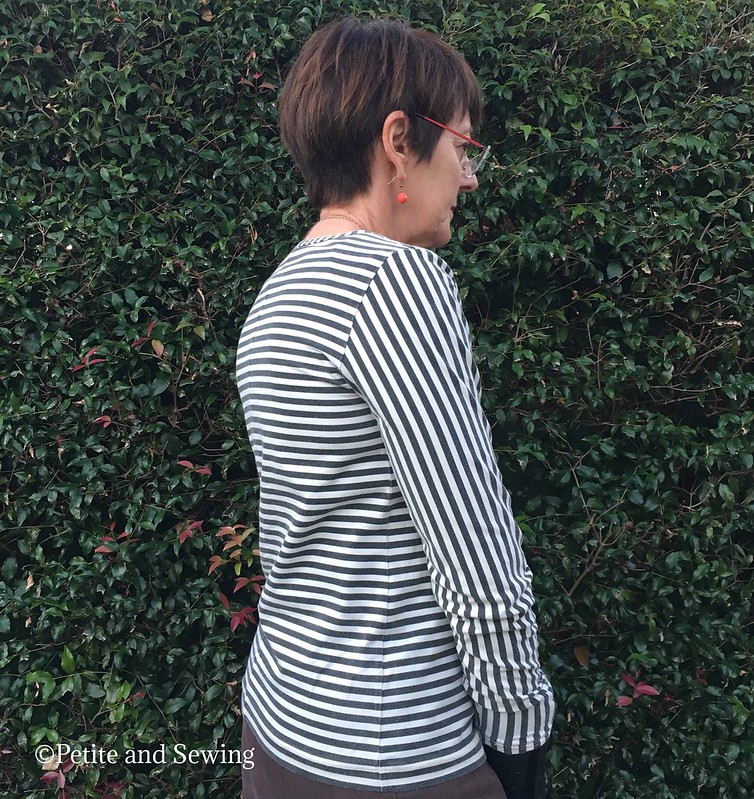 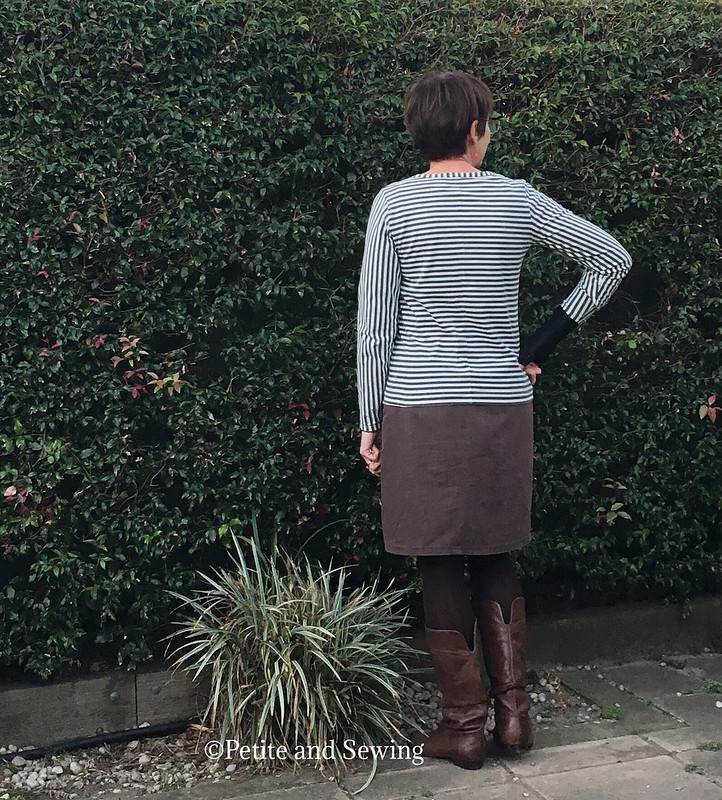 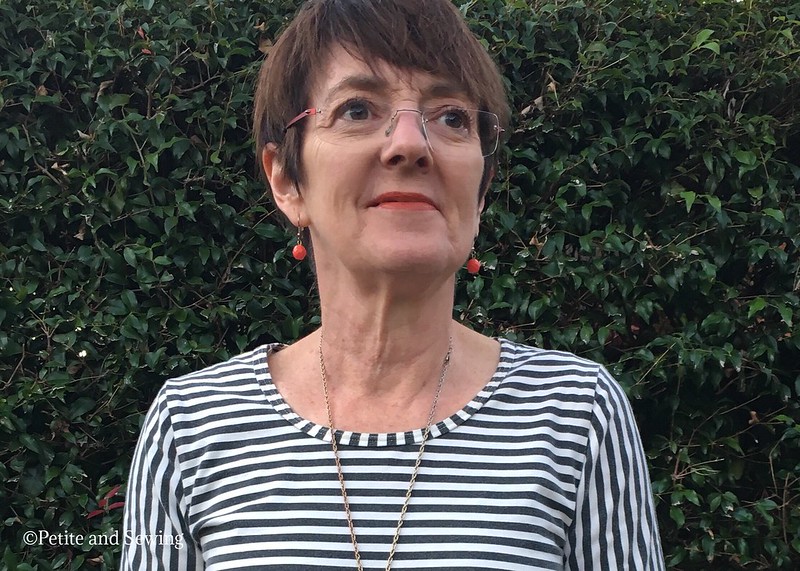 This top also got a lot of wear during Winter and I have found more striped fabric in my stash so there could be another one appearing at some time.

I've been sewing for Mark again for our 15th Wedding Anniversary back in 2016 and it has taken me quite a while to get some photos of this garment even though it is worn quite a lot.

Some of the choices from Traditional and Modern Anniversary Gifts suggested Glass, Watches, Ruby, Alexandrite and Rhodite Garnet.

I then remembered I had been given some Sweater Knit from Knitwit by Alison's mother about 10 years ago that I had earmarked for a smarter sweatshirt style that Mark had been wearing for years that were starting to show their age.

So I headed to Thread Theory and purchased the Finlayson Sweater PDF as I planned to sew this during our Sewing Weekend in Brisbane as Mark was going to be away for our wedding anniversary. However his plans changed so I suddenly had to get this made.

Working from his much loved sweater I cut a large and added 7.5cm in length as I wasn't going to add the bands.

From my bag stash fabric I found some black twill that I used for the back neck facing. 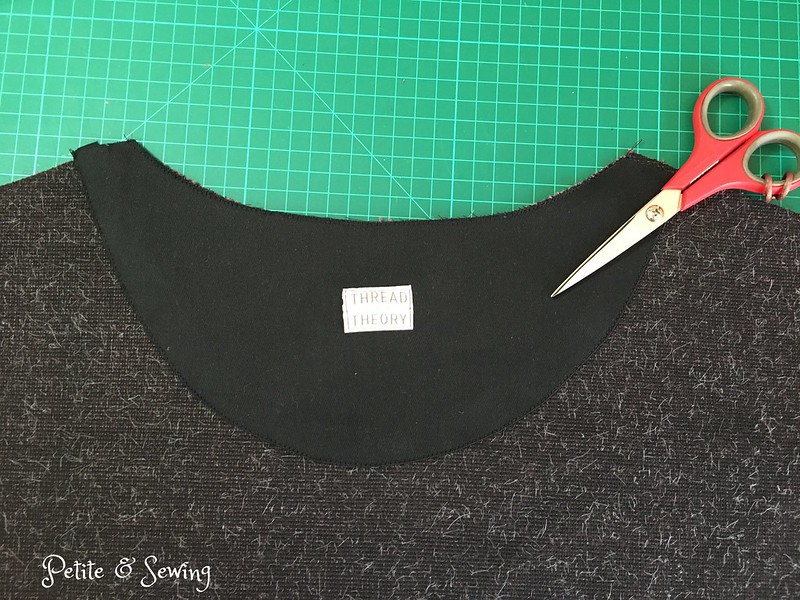 and used my Duckbill scissors to trim the bulk from the collar which I also understitched. 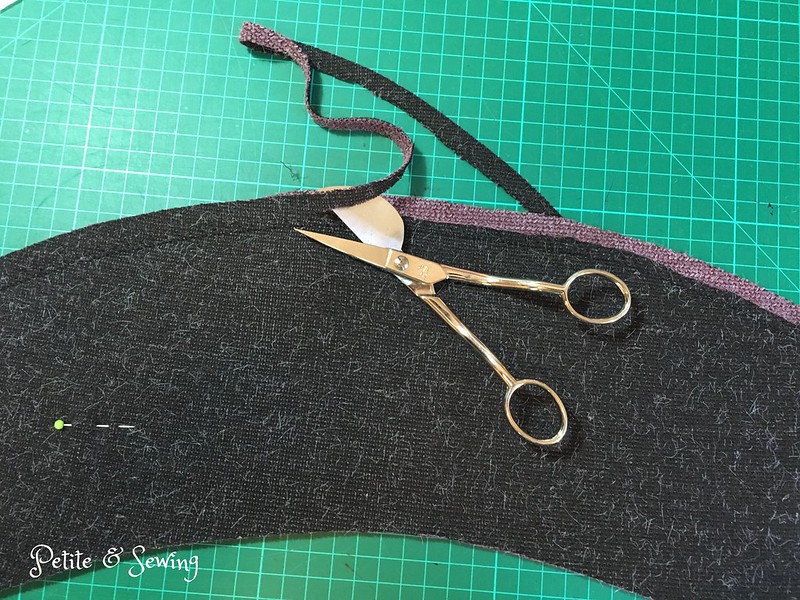 This pattern went together very well and when I had the sleeves in I decided to compare it to his much loved sweater and realised it was going to be too large in the sleeves and also thought I'd take some extra width from the side seams as well. 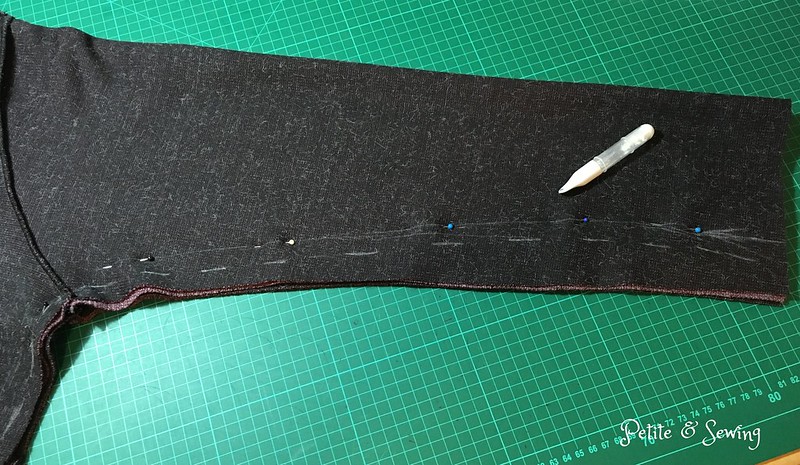 The solid line is my stitching line and the dashed is the cutting line.

The final steps were to add some black twill tape to the neckline and to do the hems on my Coverstitch. 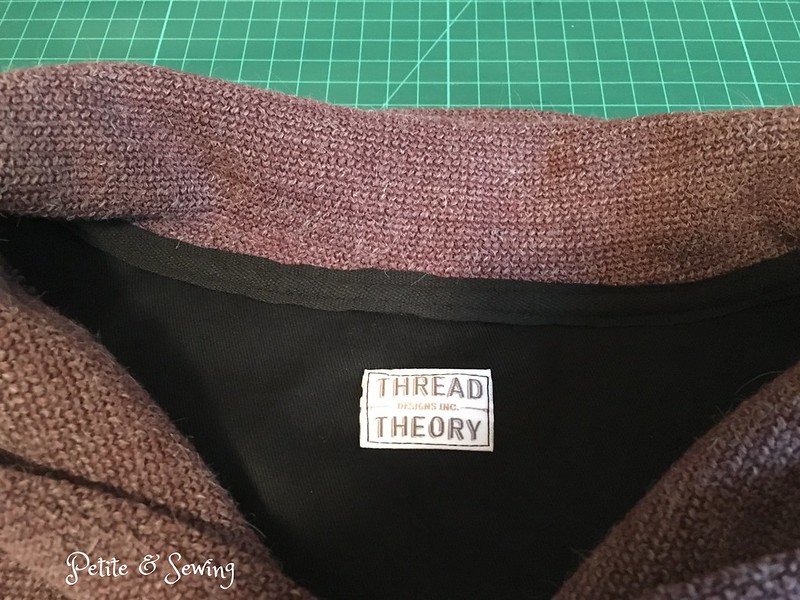 Mark has said that it is a different neckline but he seems to be quite comfortable with it as it got a lot of wear during Winter. 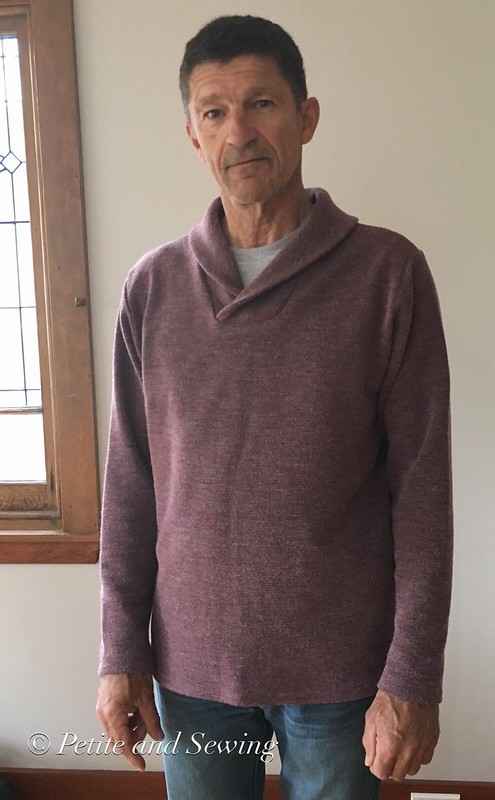 This is the only photo I have got of the back view, which shows how much fullness there is in the body,

so I will compare this to the Medium to see how much difference there is for the next version. 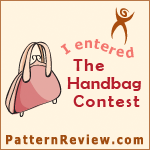 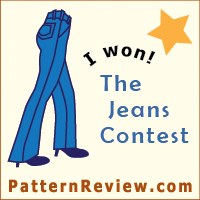 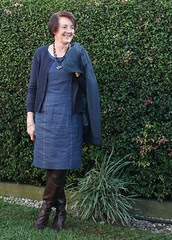 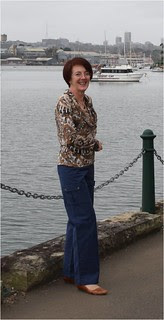